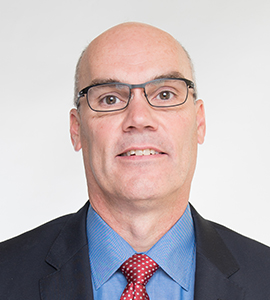 Dr. Lukaszczyk is board-certified in emergency medicine and a fellow of the American College of Emergency Physicians. He earned his medical degree at the Hahnemann School of Medicine at Drexel University in Philadelphia. He then completed his residency in emergency medicine at Kern Medical Center in Bakersfield, Calif., and has been a Vituity Partner since 1989.

I recently tried to connect through San Francisco International Airport, only to find out my flight home to Santa Barbara was canceled.

"Can I get on a later one?" I asked the customer service representative. I knew from experience that there should be two more Santa Barbara flights scheduled that day.

"No, they're all canceled."

She shrugged. But for the booming of the overhead address system, I could practically hear crickets in the silence.

"When's the soonest you can get me to Santa Barbara?" I asked with rising dread.

"Thursday." This was, incidentally, a day-and-a-half away.

For a moment, I stood there steeping in a cocktail of anger, confusion, entitlement, disbelief, horror, and above all, helplessness. Seriously, I wanted to shout. Don't you think you owe me an explanation? And when did it become OK to treat paying customers like this?

Then, rather than missing work and subsisting for the next 36 hours on Subway foot-longs, I rented a car and drove five and a half hours to Santa Barbara.


By now, you're probably wondering what my latest airline horror story is doing on a healthcare blog. Well, here's a thought for you. Flying, with all its potential for frustration, is a bit like a hospital visit.

Like airline passengers, patients often don't have a choice about going to the hospital. (Sure, you could ignore that chest pain, just like you could tell your boss you're blowing off a business trip. But both are pretty risky.)

Boarding a plane, presenting to the emergency department (ED), and being admitted to the hospital all involve a surrender of control. In the acute care setting, you don't choose your doctor any more than you choose your airline pilot. You just have to hope that the folks scheduled today — who will make life-or-death choices for you — are among the good guys.

When a consumer has no choice in providers (or indeed, in using the service in the first place), ethics come into play. In such cases, the onus is on the provider to perform to a high standard. To do otherwise is to take unjust advantage of a captive consumer.


The airlines don't seem to subscribe to this view, and many hospitals haven't embraced it either. While this is unfortunate, it also presents conscientious providers an opportunity to differentiate themselves.

We all pretty much expect to be treated like cattle when we fly. So when we have a positive experience with an airline, it stands out. We're likely to tell our friends and show loyalty to that company in the future.

Likewise, when we deliver a great patient experience, it's likely to be remembered. As much as we dread flying, we'd all probably take the worst flight ever over an ED visit or hospitalization. When we're at our most vulnerable, at the mercy of strangers, kindness and competence truly shine.

Some detractors actually argue that great customer service is actually bad medicine, because patients often demand things that aren't in their best interests. In addition to taking a rather dismal view of our patients, I think this logic flies in the face of common sense. As badly as I want to get to Hawaii and start my vacation, I don't expect my pilot to fly through a typhoon. Likewise, I don't expect hospital staff to serve chocolate cake to a patient who's just had a quadruple bypass.

Delivering great service doesn't mean giving in to patients' every whim. It means showing them that we care deeply about their health and strive to do what's best for them.

Communication is probably the most important way we accomplish this. Our professionalism, our efficiency and our camaraderie also make a strong impression. Ultimately, they want to see us as one team looking out for their best interests. This is certainly the approach we strive for at Vituity.


A few years ago, Perspectives ran a story about the ED at Adventist Medical Center – Selma (Calif.). Due to unforeseen circumstances, and with little warning, this ED was forced to downsize from 24 beds to 10.

This team could have taken the approach the airlines seem to take when facing setbacks. They could have let their standards slip and expected patients could take their lumps. The resulting delays and wait times might have scared off some patients, but not the vast majority.

Instead of shifting the blame, the ED team decided they owed it to their patients to work harder. In the months following their downsizing, their turnaround time to discharge actually dropped from 125 minutes to 108. Imamu Tomlinson, MD, who was medical director at the time, explains:

"I believe that beds by themselves don’t make people efficient. Instead, being part of a team that communicates well and shares leadership, vision, and ambition is what promotes efficiency, and this is what enabled us to increase our performance during this challenge."

John Muir Medical Center, Concord (Calif.) is home to another ED team who takes its responsibility to patients seriously. When they saw an opportunity to improve throughput, they proposed a new initiative to their hospital leadership. Their efforts not only decreased ED boarding but also helped improve flow across the hospital.

ED team members at Mercy Medical Center Roseburg (Ore.) didn't feel traditional intake and assessment procedure was meeting patients' needs. So they invented a new one. During Team Assessment, nurses, physicians and technicians come together with the patient to complete the initial interview and evaluation. The process has required some adjustments on the part of the team, but it's also boosted "likelihood to recommend" scores by two quartiles. The process has since been adopted by many other Vituity EDs.

Finally, Sequoia Hospital in Redwood City, Calif., transformed their care when they committed to treat every patient as they would a family member. As a result, their patient satisfaction scores have been consistently outstanding.


Patients can't do a thing about our inefficiency. They have little voice in the matter when we ignore their needs. And as awful as substandard service feels to travelers, hospital patients are infinitely more vulnerable.

Patients of AMC-Selma, John Muir Concord, Mercy Roseburg and Sequoia still have limited choices. But the administrators and providers of those hospitals see this as a reason to raise their standards, not an excuse to coast or deliver the bare minimum.

So here's my wish for all my healthcare colleagues. Let's be so good, we can never be lumped into the same category as those unreliable airlines that don't seem to care. Let's work toward a day when great service doesn't shine so brightly because it's become the norm at hospitals everywhere.


[Image credit: "On the airplane" by Skyseeker licensed under CC BY 2.0]