Wanna Be Startin' Somethin': The Power of Patient Callbacks 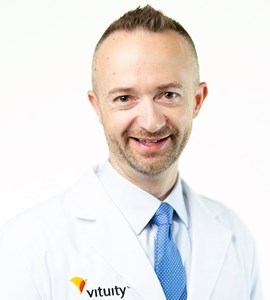 Director of Quality and Performance

Dr. Seth Thomas is a Director of Quality & Performance for Vituity’s Emergency Medicine service line. His expertise and administrative duties are focused on improving emergency department operations, clinical quality, efficiency and throughput. Dr. Thomas also serves on the board of directors for the Mutual, Vituity’s own medical malpractice carrier. Dr. Thomas is board certified in emergency medicine and the former medical director of the emergency departments at both Mercy San Juan Medical Center and Doctors Medical Center of San Pablo. He currently practices emergency medicine at Mercy San Juan Medical Center in Sacramento, California. Dr. Thomas completed his undergraduate studies in Integrative Biology at UC Berkeley before moving to New York for his medical training. He attended medical school at Albany Medical College in New York and completed his residency training in emergency medicine at Loma Linda University Medical Center before joining Vituity as an administrative fellow himself in 2009-2010.

Those words were famous — you remember them! In 1983, the King of Pop, Michael Jackson, sang those critically acclaimed lyrics that will forever be burned into our memories.

So what does this song have to do with patient callbacks? Well, if you listen to the words, quite a bit. Anyone who has ever struggled to build an effective callback program can relate to obstacles "too high to get over" and pain that is "thunder."

And that's unfortunate, because contacting patients after an acute care visit can be powerful. The experts of ACEP's Emergency Medicine Practice Committee estimate that a simple call can raise satisfaction survey scores by 30 to 70 percentile points.

Callbacks work for other service lines, too. Gail Silver, MD, our Director of Ambulatory and Urgent Care Practice, had this to say:

Callbacks are particularly important for a retail business like our Urgent Care sites. Not only do the Providers get satisfying feedback we have had our callbacks called out on Yelp as a big differentiator for our sites. It has been great for building volume as well as patient satisfaction.


But establishing a calling routine can be a tall order when countless other operational, financial, and quality initiatives compete for providers' time.

Administrators and clinical leaders, I get it. I found myself in exactly your shoes not that long ago and had to muster up the energy and resources to pull it off.

It wasn't easy. But in today's post, I'll share how the Redlands Community Hospital ED recently launched and grew their patient callback program into a patient satisfaction powerhouse.


Rocking It at Redlands Community

Let me start by saying that the team at Redlands Community are true rock stars.
When he accepted a position as ED Medical Director, Evan Houck, DO, knew he wanted to make patient callbacks a priority. In order to get it off the ground and have the best chances of success, he chose a champion — and chose quite well I might add. He put Assistant Site Lead Brian Stinnett, PA-C, on the job and really let him own it from day one.

So how did they do it, and what worked for them? Here are a few takeaways that you may be able to apply to your callback program:

In order to get any major initiative off the ground and ensure performance and sustainability, there needs to be ownership of the process and accountability for outcomes.

Choosing a champion from within and allowing them to lead the team is a best practice we must all apply. When Houck chose Stinnett to lead the patient callback initiative, he gave him ownership and decision-making authority over the process.

Stinnett immediately got to work and took pride in the project. He started spreading the word and working with providers to design the ideal callback program. The rest is history!

Stinnett and Houck didn't begin by asking the Redlands providers to call back 25 percent of their patients. Rather, they started slowly and built up to that level.

For some team members, callbacks were exciting. For others, they were just another task added onto a busy day. Starting slowly and asking providers to call back only one patient per shift lessened the burden and made the change more comfortable for all.

Once they started calling and reaping the benefits, team members became more enthusiastic. So when Brian asked them to start calling two, three, or more patients per shift, they were open to the idea.

Let me start by saying that incentives, although helpful, aren't everything. They may help to motivate some providers, but they won't work for everyone. And they're generally most useful at the start of an initiative before team members have experienced the many positive aspects of callbacks for themselves.

Stinnett and Houck started by paying $10 per callback. Later, as the expected number of callbacks grew, they backed off to $5 per call.

There are a number of other ways to structure incentives. For example, some ED groups tie callback performance to a percentage of their quarterly surplus or make them a condition of surplus distribution.

However, at the end of the day, what you really want is for your providers to realize the personal, nonmonetary benefits of making callbacks. Touching base with former patients — particularly from those who are happy and thankful for the care they received — acts as a positive feedback loop leading to true sustainability.

This transition of perceived value from monetary to personal gratification and recognition is what all administrative and clinical leaders should aim for.

ED providers are generally a competitive group. So if the departmental culture is a positive one, friendly competition can be a great way of raising the bar using self-motivation as the means to achieve a goal.

After the launch, Stinnett provided team members with regular feedback on their progress via email. Each week, he'd send stats on the number of calls made by each provider. This sparked a bit of friendly competition in which team members stepped up their efforts to try and climb the "leaderboard."

The Redlands Community team uses a shared Google Doc to record their callbacks and track performance in real-time time. The document can be easily accessed during shifts via smart phone.

This setup allows Stinnett to quickly check compliance and generate the weekly performance report he emails to the providers. It also includes a link that allows providers to check the standings between reports.

One important caveat: when using this approach, it's essential to protect patient privacy. Redlands Community's shared tracking document is hosted through a paid Google corporate account rated as HIPAA compliant. To be extra safe, the team refrains from entering PHI into the callback document. Any documentation resulting from the call becomes an addendum to the patient's medical record.

6. Borrow From the Best

The Google Doc reporting system is a great example of how innovation can disseminate across a large national partnership. The idea has been adopted by several Vituity sites to help leaders gather data and promote accountability.

I learned a long time ago that leaders can't ask their teams to do something that they themselves aren't already doing. There's no way around this one. As a leader, you have to believe in the "why" and really walk the talk — be the first to take the leap and show others how you expect them to act.

Stinnett and Houck were no exception to this rule. From day one, they kicked off their callback program by making callbacks themselves and touting the benefits to others. Once the team members saw what their leaders were up to, they started jumping on board.


Don't Stop Until You Get Enough


So as many of you have experienced, it's not easy getting a patient callback program off the ground. It takes dedication, commitment, and persistence. But it can be done.

Within months, the program at Redlands Community hit critical mass and took on a life of its own. In August 2016, ED providers called back over 1,200 patients, or just over 25 percent of their ED volume.

It's an extraordinary feat that's paying them back with a tremendous return on investment. By connecting with so many discharged patients, their site is benefiting from immediate qualitative feedback, service recovery opportunities, and improved patient and provider satisfaction. It's truly a win-win-win situation.

Has your department started a "Thriller" of a patient callback program? Comment below to share your team's tips and lessons learned.SaveSave