Putting a Face on Quality Metrics 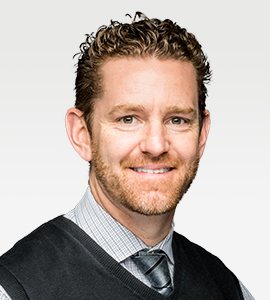 Matthew Stilson, MD, is Vituity’s Operational Vice President based in Chicago. He joined Vituity in 2005 and served as a member of the New Partner Committee. He later served as Medical Director for several Advocate Health Care emergency departments and urgent care centers, then as Regional Director.

Dr. Stilson is board-certified in emergency medicine and a Fellow of the American College of Emergency Physicians. He earned his Bachelor of Science with honors in genetics from the University of California, Davis. After continuing on to medical school at the University of California, Irvine, he completed his emergency medicine residency at Advocate Christ Hospital in Chicago.

One of the emergency departments (EDs) I oversee as regional director of Vituity's Midwest region is part of a big, multihospital system.

Until recently, the system never counted ED metrics on its quality scorecard. It was sort of like emergency medicine was relegated to the kids table at Thanksgiving.

But that's about to change.

Starting in January 2016, performance on ED core measures will be incorporated into individual hospital scorecards (which flow into the system-wide scorecard).

Specifically, EDs will be evaluated on:

Suddenly, all eyes are on our system's EDs. And not everyone is happy about it.


To prepare for the coming changes, and act as a springboard for performance improvement, the health system held a videoconference with the ED medical directors and nurse directors of all of the system's hospitals.

They initially shared what the system would do to support ED performance. Then the topic shifted to what the individual hospitals were going to do about improving their performance.

Excuses started to fly. Some common themes that emerged:

Yes, there was some interesting psychology at work. Everyone was pulling out the stops to undermine the process and avoid accountability.

Then one of the administrators asked me, "So what is your ED doing differently?"

This made sense, because our Vituity-managed ED was the only one present that had already exceeded every target on the scorecard.

I could have talked about hitting numbers or process improvement or making widgets. But given the general coolness toward change, those all seemed like doomed approaches.

Instead, I decided to tell a story.


Vituity began managing the ED in 2009. Before our arrival, the department was underperforming on core measures. System executives hoped Vituity would provide the leadership and resources to turn things around.

As incoming medical director, I realized this would not be an easy sell. So my team and I gathered together every stakeholder who had an impact on patient care in the ED, including providers, nurses, technicians, radiology, lab, registration and others.

All of these people were used to getting grief about the metrics. So we didn't start there.

Instead, we laid out a scenario.

Let's say a little girl falls off her backyard trampoline at 5 p.m. on a Thursday evening and breaks her arm. Her family rushes her to our ED.

They spend a significant time in the waiting room with this crying child before they're seen by anyone and a total of 90 minutes before they're evaluated by a physician. They're confused. Their nerves are frayed. They wonder if they somehow signed in wrong.

Later, they move from place to place, repeating their story to a long line of faces. They have no idea who does what. They're not even sure who the doctor is.

Their daughter gets sent for X-rays. They wait anxiously for the results, but no one comes to talk to them.

Finally, someone (the doctor?) comes in and shows them the X-rays. Their daughter's arm is splinted and she's discharged. They walk out of the department at 10 p.m. on a school night.

Everyone agreed this was a pretty realistic scenario in our department. And it bothered us.

Knowing the raw metrics was one thing. But when we stopped to think about our performance in human terms, delivering suboptimal care was really not okay with us.

And to my surprise, a ton of hands went up.


What I wanted our ED team (and my colleagues on the videoconference) to understand is that core measures aren't just onerous hoops that payers and the government set up for providers to jump through.

Good metrics are a reflection of compassionate, patient-centered care.

If you're not hitting your pain management metric, that's not just a number on the scorecard. That's a little girl who's crying in the waiting room because her arm is throbbing.

What if she were your daughter?

If you're not hitting your turnaround goals, that's not just a number either. That's someone who's spending hours away from their job or their kids or staying up until 2 a.m. on a work night.

In the age of accountability, I think it's important to remember the reasons we chose emergency medicine. Maybe we wanted to be there for people during the most difficult moments of their lives. Or maybe we liked the idea of providing a safety net for people in need.

The numbers don't keep us from fulfilling our mission. On the contrary, strong performance metrics show us we're succeeding.


Patients Are Worth It


I wish I could hand the medical and nursing leaders on our call a magic bullet that would make ED transformation easier. But the truth is, we went through a painstaking process to move from our current scenario to our ideal one.

We rigorously applied lean and Six Sigma methodologies to our workflow. We overhauled our front-end and implemented Rapid Medical Evaluation®. And most importantly, we worked to instill a culture of caring in which we put patients at the center of everything we do.

It was tough, but we kept going because we all wanted the same things.

We wanted that girl and her family to be greeted immediately by a friendly face.

We wanted to treat that child's pain right away.

We wanted to make sure the family understood the plan of care and expected turnaround times.

And finally, we wanted definitive care provided and the child either admitted or discharged home in a reasonable amount of time.

Ironically, once we looked away from the numbers and focused on bringing our shared vision to life, our core measure performance shot up almost effortlessly. And over the next couple of years, our ED volumes rose 50 percent.

The changes that drove the quality numbers up were clearly working for the patients, too.


I'm honestly not sure I convinced anyone on that call to embrace accountability or performance improvement. But I do hope I got them thinking about the meaning behind the metrics we track.

To sum it up, having great numbers is awesome. But I'll bet to most providers, delivering fantastic care and having the community's trust feels even better.

We need to remember that the two almost always go hand-in-hand.