It's Time for a Broader View of Healthcare Value 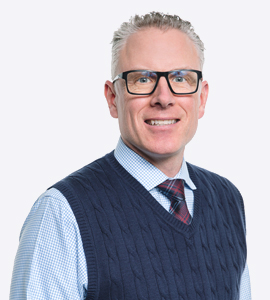 Dr. Anderson is an elected member of the Vituity Board of Directors. He is board-certified in emergency medicine and currently serves as Regional Director for the Riverside Region. He previously served as the Medical Director for Emergency Services at Desert Regional Medical Center from 2004 to 2008 and as a Regional Director in Illinois. He is a graduate of Loma Linda University School of Medicine and completed his emergency medicine residency at Loma Linda University Medical Center.

One of the toughest challenges facing any military is how a trained soldier will act when bullets start flying.

Some hunker down, claiming it’s common sense to avoid injury. Of course, this type of rationalizing can also be a way (subconscious or otherwise) to disguise fear. Nor does it accomplish the unit's goals, because inaction and self-preservation aren’t exactly keys to success in battle.

Other soldiers face fear head on. In a 2011 blog post for the Wall Street Journal, reporter Bing West shared his experiences while embedded with a highly effective platoon of Marines in Afghanistan. One of the officers told West about a radio conversation they’d recently interrupted between Taliban leaders and the local militia. The Taliban was chastising the guerillas for running from fights. The locals protested that victory was impossible because the Marines actually ran toward their bullets.

West also reported numbers — kills, casualties and days in country. But no statistic he presented summed up the courage of those men — and their value to the war effort — as neatly as the bullet anecdote.

The Value of a Decision

So why start a healthcare post with a war story? Well, I think because West's reporting parallels certain developments in our industry — in particular the way we value healthcare.

Value has become a driving force in our industry. Indeed, as reimbursement shifts toward value-based purchasing, increasing the "value" of care has become a survival imperative. Our hospitals and health systems are striving to measure value, to compare it, report it and maximize it. We've become so focused on scores, numbers and balance sheets that some in our industry have begun to believe that the cost of care actually reflects its value. But sometimes these figures don’t tell the full story.

At the most fundamental level, value is a measure of health outcomes achieved per dollars spent. On its surface, it’s a pretty elegant formula. It focuses on results, relates directly to efficiency and ties success to the individual patient. According to prevailing wisdom, high-value care is good care.

But I feel that this equation doesn’t tell the whole story. Of course we all want great outcomes, but how we achieve them is also important.

As providers, we’ve become so focused on numbers that we’ve lost sight of the human side of value.

Here’s an example from my own experience. Vituity physicians at a local site were facing a move by administrators to consolidate and employ. On paper, this move was going to boost the value of care by aligning physicians across the organization.

However, the medical staffs of the affected hospitals had concerns. They felt that not only was Vituity performing well on metrics, it was also forging strong, collaborative relationships between departments. They worried that if the consolidation went through, progress would be disrupted. What's more, the innovations, processes and culture that fostered that success would be lost. And so at some sites, they actually came to the defense of Vituity, asking for it to remain independent.

The affected Vituity physicians agreed. They felt strongly felt they could add more value for the hospital and patients by remaining an independent group. Employed physicians, they believed, would tend to hunker down and wait for orders. By contrast, the group would be highly motivated to take initiative and tackle problems. In other words, they wouldn't be afraid to "run toward the bullets."

So how can we conceptualize healthcare value in the most meaningful way? I believe that a distinction between quantitative versus qualitative value can provide better understanding.

Quantitative analytics such as patient satisfaction, operational times and so forth are conceptually easy to understand. The desired benchmarks are not always easy to accomplish, but they’re universally accepted as worthy goals.

However, we need to keep these numbers in context. Reports expressing such metrics articulate system health — but not necessarily value.

To pose another military analogy, think of a platoon with a low casualty rate. That’s generally a positive statistic. However, it could also mean that they haven’t seen much action, or that they’re not taking the risks they need to in order to get the job done. In fact, it’s entirely feasible that a platoon that’s experienced many casualties (as did the one West covered) is more effective in battle.

Qualitative value is much harder to articulate, but it's worth doing because it best defines one’s true business value. Instead of reports that capture data, qualitative value creates a conversation that tells the story of success, accomplishments and values held by the network or organization.

In his war reporting, West uses personal stories to illustrate the courage of the men serving in Afghanistan. For example, he tells of one sergeant who leaves his safe position to aid fellow soldiers who have stumbled into a minefield. The man risks his life carrying the wounded to safety. Such images stick with the reader far longer than a dry recitation of numbers and statistics.

Creating Value in the Minds of Others

Value is a complex issue that encompasses a varied combination of both quantitative and qualitative data. Meeting operational goals and metrics is clearly a prerequisite for value. But unless we reveal the stories and struggles behind our successes, these numbers may ring hollow — and they may not tell the whole story.

It is through stories that we demonstrate relationships, integration and success that complete the concept of value. On the other hand, stories alone can be a bit anecdotal. Without metrics and numbers to back them up, they feel subjective, and the conclusions drawn from them can be easily challenged.

It is only by presenting a combination of quantitative and qualitative data that we can demonstrate the true value an organization brings to the table.

In healthcare, we've generally done a good job gathering and reporting quantitative data. But let's not forget the value of qualitative sources.

In the both the hospital and the battlefield, action or inaction is a decision we face daily. When people are willing to perform aggressive, unsolicited, selfless acts on behalf of others, I offer that this illustrates true value.

When the medical medical staffs in the story above came to the defense of Vituity during consolidation, and I think that is one of the truest representations of quality. True value results in action that creates stories.