Hospitalists and ED Physicians: We’re in the Same Fox Hole 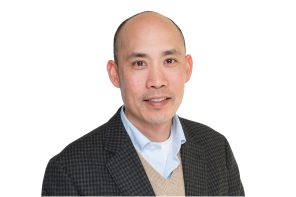 Hartwell Lin, MD, is an elected member of the Board of Directors and serves as a regional director for Vituity. He currently practices emergency medicine at John Muir Medical Center in Concord, Calif., where he previously served as emergency department medical director and chief of staff. Dr. Lin holds a Medical Doctorate from Albany Medical College (N.Y.) and completed his emergency medicine residency at the University of Pittsburgh.

“In general, our relationship with hospitalists has been fantastic. To have physicians who are willing to take patients with a lot of different disease states that are not necessarily procedure oriented, don’t necessarily fit into a specific specialty, or are somewhat undifferentiated in their presentation — for us that is an absolute joy.”

At my hospital, the emergency physicians and hospitalists spend a lot of time together. We socialize. We play golf. We even attend their kids' birthday parties (and vice versa). Who can turn down cake, right?

In my experience, this is unusual. Warm feelings don't seem to develop naturally between our specialties. Too often, conflicting priorities pit the hospitalists' needs against those of the emergency physicians, putting both on the defensive.

In her recent post at The Hospital Leader, hospitalist Sowmya Kanikkannan, MD, remarked that while she had friends across many specialties, she didn't have many who were emergency physicians — at least not early in her career. This was true despite that fact that she interacted with the emergency department (ED) more than any other department.

This divide is understandable but by no means inevitable. In today's post, I'll illustrate the mutual benefits of emergency physician-hospitalist camaraderie and share some bridge-building strategies that have worked for my own teams.


Hospitalist to the Rescue


Recently, I had an experience that underscored why it's so important for emergency physicians to nurture relationships with hospitalists.

An elderly patient (I'll call her Rose, maybe it was Ethel, she’s probably been in your ED too) was brought to the ED one night by her family. Her complaints were vague: dizziness, faintness, shortness of breath. According to her chart, this was her third ED visit in two months.

As I talked to Rose's family, a disturbing but common picture emerged. Lately she'd been deteriorating and losing the ability to care for herself. She lived with her husband, who suffered from Alzheimer's dementia. Her son and daughter-in-law were desperate to keep the couple together and wouldn't consider a nursing home. On the other hand, they were clearly exhausted by all the caregiving required.

And there they were, looking to me to fix the problem. A terrible burden settled over me. They'd just handed me an unsolvable puzzle.

Nothing in Rose's workup clearly indicated a need for admission. At the same time, I couldn't imagine sending her home. What if she fell and came back with a fracture? What if she got dehydrated and deteriorated while the kids were at work?

Not knowing what else to do, I called the hospitalist. "I'm sorry," I said. "I just don't know what to do with this patient. Her home situation is a mess. I'd feel better if we could just admit her." There was no attempt at imagining a UTI or calling a faint infiltrate. I’ve built trust with my hospitalists colleagues, and I wasn’t about to throw that out the door.

At this point, I knew I was asking for the moon and stars. The hospitalist already had a heavy caseload and I was backing up the dump truck. But I was out of options, so I laid out my case and held my breath.

"Sounds like you're in a tough spot," the hospitalist said. "How about we watch her overnight, and tomorrow I'll get case management involved?"

I nodded as a wave of relief broke over me. I'd worked with this hospitalist for a while, and we considered ourselves friends. Still, I couldn't quite believe she was happily taking this difficult case off my hands.

In that moment, I was glad I'd taken time to know her — rather than waiting for a problem to crop up before showing my face.


I think we all agree that patients benefit when emergency physicians and hospitalists develop trusting, mutually supportive relationships. The trick, of course, is getting there.

Trust doesn't develop overnight. It deepens over time as you demonstrate appreciation for your colleagues and sensitivity to their needs. Emergency physicians, for example, struggle constantly with throughput and disposition. Meanwhile, hospitalists are pressured to manage inpatient lengths of stay and multiple facets of care beyond the medicine. Acknowledging these realities and doing what you can to help goes a long way toward establishing rapport.

Honesty is also important. For ED physicians, this means being straightforward about your admission requests. When you're desperate, it can be tempting to make a case sound worse than it is. But if you do, the hospitalist will see right through you, and the relationship will suffer.

In addition to your own efforts, your organizational culture makes a difference. Our department, for example, tends to view the hospitalists as extensions of ourselves. We try to operate as one team that works together to meet the needs of each patient.

And of course, taking time to know one another as people makes a tremendous difference. I'm a lot more willing to compromise for a colleague who's had me over for dinner than one who only shows up when there's a disagreement.


An Emergency Physician Saves the Day


There's yet another reason for emergency physicians to go the extra mile for our hospitalists (and vice versa). In medicine, as elsewhere, good deeds are paid forward.

A few nights later, the same hospitalist who admitted Rose had an ICU patient crash on her at 3 a.m. The person was in dire straits and needed an arterial line and a central line. Meanwhile, the hospitalist still had a full caseload of patients to manage plus three admissions waiting in the ED.

She couldn't do it alone, and she knew it might be a struggle to get the on-call intensivist in for what were considered semi-urgent needs. So she called me downstairs. "Can you help?" she asked. "This one's really going south fast. I'm scared I'm losing him."

Though it was a ridiculously busy night in the ED, I didn't hesitate. "No problem," I said. "I'll get there as soon as I can." When I walked into the ICU, the look of relief on the hospitalist's face was all too familiar.

This sort of teamwork doesn't happen in a vacuum. I wasn't obligated to drop everything for this hospitalist, just as she wasn't duty-bound to take on my difficult admission. It's something we do for each other out of mutual respect. And it's taken time and hard work to reach this place in our relationship.

At the end of the day, we’re charging the same hill and there is no better feeling than to have a trusted partner with you in the foxhole. So, have you hugged your ED physician or hospitalist today?