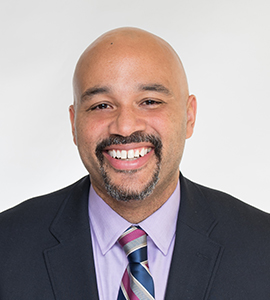 Pascal Crosley, DO, is a Vice President of Practice Development at Vituity. He joined the organization in 2005.

He holds a bachelor's degree in biological sciences from Towson University in Maryland and a medical degree from the New York Institute of Technology College of Osteopathic Medicine in Old Westbury. He completed his emergency medicine residency at NYC Health + Hospitals/Jacobi.

He is a member of the Maryland Chapter of the American College of Emergency Physicians.

Saint Agnes Hospital of Baltimore had been caring for the community since 1862. But in the early 2010s, the ED was developing a reputation for crowding and long waits. The department spent 170 hours a year on diversion. Lengths of stay exceeded national averages, and about 8 percent of patients were leaving the department without seeing a provider.

The department also had difficulty recruiting and retaining providers. The emergency medicine residencies at University of Maryland and Johns Hopkins University should have provided a fresh pipeline of new physicians to local EDs. However, it had been many years since Saint Agnes had successfully recruited a resident from the metro area.

The effects of inefficiency, patient dissatisfaction, and staff turnover reverberated through the department's culture. The providers and staff felt demoralized and disconnected from one another. They had little to no energy to drive change. Nor were there strong physician leaders to show them a way forward.

To improve the quality and reputation of their emergency care, the Saint Agnes administration decided they needed a new outsourcing partner. They wanted to bring in a physician group that had both ED expertise and the ability to attract quality physicians. Most of all, they needed strong physician leaders who could help them implement their strategic plan both in the ED and across the hospital.

It was around this time that I sat next to some Saint Agnes administrators at a conference in Florida. We started chatting, and I told them that my dad had been a physician in the city of Baltimore for 40 years and that I’d grown up in the neighboring suburbs. At that time, I was serving as the ED Medical Director for a hospital in Atlanta with Vituity.

We kept in touch. I visited the hospital in Baltimore and got to know more about their needs. In 2013, Vituity was awarded the Saint Agnes ED contract, and I accepted a position as ED Chair.

I packed up my family and headed north to Baltimore.

Fortunately, I was joined in Baltimore by Randolph Taylor, who previously worked with me as the Assistant Quality Director in Atlanta. At Saint Agnes, he assumed the role of Quality Director, and right off the bat made an impactful contribution to increasing clinical care in the ED.

Over the first few months, I'd learned a lot about the Saint Agnes ED. Our biggest challenge would be to nurture a positive culture around patient care. I knew that doing so hinged on attracting the right providers.

This was going to be a challenge. The contract was scheduled to start in July, which left us only three months to recruit eight full-time physicians and four PAs and NPs. Vituity had no presence in the area yet, and the department didn't have the greatest reputation among physicians.

This was going to be, to put it mildly, a tough sell.

I decided to approach it by focusing on possibilities. We would emphasize the benefits of joining Vituity, including democracy, shared ownership, financial transparency, and opportunities for leadership development. We sweetened the deal by creating several new Assistant Medical Director positions.

Right away, the Vituity recruiters swung into action. They cold-called local residents and providers and attended area conferences to raise our profile. Meanwhile, a Vituity partner who'd trained at Johns Hopkins sent me a list of local physicians to approach personally.

In the end, Vituity's culture and partnership model sold itself. Almost every physician on the list joined up. In just one month, we were fully staffed with highly qualified physicians, PAs, and NPs — most of who were local and understood the needs of our diverse patient population.

We were excited about our new provider team, but we knew we couldn't turn the department around by ourselves. To create lasting change, we'd need to gain buy-in from everyone in the hospital whose role touched emergency care.

We knew early on that the nursing department was going to be crucial to our success. They were a great team with dedicated leaders, but they'd had little support from the previous physician group. They'd undertaken some innovative improvement work, but hadn't been able to gain traction.

One thing I really value about Vituity is its culture of collaboration. As ED Chair, we strove to form a strong leadership dyad with our ED Nurse Director. We met regularly to discuss our goals and strategy.

We also formed an Emergency Process Improvement Committee — a multidisciplinary group that provides a collaborative framework to implement new processes. Membership was open to everyone, including physicians, PAs, NPs, nurses, and clerical staff.

Over the next few months, our newly unified ED team began to redesign the care process. Some of our biggest changes involved Vituity’s signature processes that had been incubated and refined in departments across the country:

Rapid Medical Evaluation (RME) ®. We actually redesigned our entire front end to implement this parallel processing model. RME ensures that patients are quickly evaluated by a provider so that treatment can promptly begin.

Team Care. This is a philosophy of care, created by Wade Fox, DO, Regional Director at Vituity, in which providers, nurses, technicians, and other staff work together to expedite assessment, treatment, and discharge. The process emphasizes shared responsibility and teamwork and is a great patient satisfier.

Practice Management Consultants. With the help of PMCs Pam McCord and Abbie Haigh, we were able to implement a new structure and improved processes that allowed our team to effectively collaborate.

Getting these processes in place was a tremendous team effort. In many departments, it would have taken years to accomplish. But the new Saint Agnes ED team showed an unusual amount of heart.

A year later, things were looking quite different around the ED:

Patients were moving so efficiently through the department, that things actually felt quiet. "Wait until summer," the veteran staff kept telling me. And then when summer proceeded smoothly, "Wait until flu season."

When we showed the staff our latest metrics, they couldn't believe it. During the so-called quiet period, our volumes had risen by 10 percent. They were caring for far more patients with a fraction of their previous effort.

While the metrics were nice, the most significant changes were cultural. It felt like someone had flipped the light switch on provider engagement. Team members were happy to come to work. They showed genuine care to the patients and one another. During callbacks, patients often remarked on the positive teamwork they'd observed.

Word got out in the community and job inquiries started flowing in. Suddenly we had no trouble filling the occasional open position.

Our "founding" team of physicians took full advantage of the leadership opportunities available through Vituity, while many others demonstrated great leadership potential. One of these physicians now serves as Saint Agnes' Chief Medical Informatics Officer, two others eventually succeeded me as ED Chair, another will serve as our ED Chair at Howard University Hospital, and yet another at St. Mary’s Hospital in New Jersey, Vituity's first site in the northeast. One also was recently selected as a Vituity administrative fellow, a program that offers advanced leadership training. We even recruited and retained a Hospitalist Director who has since become the Director of Quality and Performance at FutureCare Irvington in Baltimore.

While I've since moved on to an executive position with Vituity, the Saint Agnes ED is never far from my thoughts. The ED team has continued to evolve and grow. Our physicians are involved in initiatives that reach far beyond the ED.

Saint Agnes is a forward-thinking hospital that strides ahead in redesigning care delivery. I'm confident our engaged and energetic ED team will help them reach these goals.